Thanks to Manny Pacquiao, the Philippines has been put into the map where the sport of punching people is concerned. Of course, you know what I mean, boxing, and it’s the one thing I never thought I’d ever do, much less enjoy, but you’re now reading this post, which could only mean one thing, I loved it! Okay, got overly excited there.

I just happen to see the Instagram story of my friend, Cathy, one day when she went to a boxing gym. Just like that, I decided I wanna try boxing and asked her to come with me. I remembered I have another friend who has been boxing for a long time, Krish, so I asked her too and that’s how this boxing trio came to be.

Elorde is a reputable boxing gym named after one of the greatest Filipino boxers that ever lived, Gabriel “Flash” Elorde. There are numerous Elorde gyms in Metro Manila, the one that we visited is in Arnaiz, Makati as recommended by Krish.

The gym is small and old, with several gym equipment, such as heavy bags, double-end bags, dumbbells and barbells, a power rack, and a boxing ring. I liked that there weren’t many people around when we visited, which means I had a few witnesses to my embarrassment, haha…

They also offer Muay-thai training but since I haven’t tried that one yet, I’ll just give you the boxing training rates:

Krish brought a purple-colored hand-wrap for me, this is used to protect the hand and wrist against injuries. You can rent them at Elorde but for hygienic purposes, it’s best that you purchase and bring your own. After our training, I bought my own hand-wrap from Landmark for ₱250. As with the gloves, you can rent them for ₱50. I’d probably buy my own once I’ve enrolled in a boxing gym.

Krish, having done this longer than us, has already mastered the moves, Cathy tried it before, and then there’s me, the only newbie in the group. Krish specifically asked for Kuya Edel, who she said, is the most sought-after and the best trainer in that gym. He is a dark-skinned man with a mustache, probably in his 50s, and a former professional boxer.

He was the only trainer who assisted us, so I had a lot of downtimes when it was either Cathy or Krish’s turn. We started with the hand-wrap, Kuya Edel did mine and I cringed a little at how it tight it was, it felt like the blood in my hands had been restricted.

I started with the double-bags and though it looked simple on movies, it wasn’t. It required timing, a tempo that I couldn’t ace. It had me frustrated but I had to keep telling myself that I am new to all this, I shouldn’t be too hard on myself.

Finally, it was my turn to work the pads but first, I had to learn the footwork. Kuya Edel instructed me to keep my left foot forward while my right foot stays in the back. I had to bend my knees a little and have to keep them soft, so were my ankles. Many times, Kuya Edel asked me to pivot, but whatever happens, I had to end up in a stance in which I am facing him.

He then taught me the basic punches, jab, straight, uppercut, and hook. There was a moment when Kuya Edel got frustrated that I couldn’t get it right that he took off my gloves and taught me the techniques first until he was confident that I got the basics down pat.

Each round lasts for 3 minutes, after which, you would hear a bell ring. I can’t remember the last time I had been this absorbed with a task. It seems like all the outside noise has been muted and all I could hear was Kuya Edel’s voice. He told me to move forward, jab, uppercut, straight, hook, then repeat. I started out real slow and weak, fully aware of just how awkward my movements are.

I’ve been doing the 16-hour intermittent fasting so I went to the gym with an empty stomach. I found out soon that this was not a good idea. I felt my stomach grumbling the entire time and I also felt weak. They advised me to eat a light breakfast next time at least 2 hours before the training.

I don’t know what it’s called but on my next round, Kuya Edel wrapped something around my waist that is tied to a pole. It created resistance and forced me to use all of my strength so I could get closer to him and throw punches. It amped up the difficulty like 10 times. I was only able to do 3 rounds of it because it made me more hungry and turned my knees to jelly.

You can watch my vlog about this boxing experience in this video below.

It wasn’t easy but not as hard as I imagined it to be. I wasn’t happy that I was stiff and slow, but then I am a beginner, that’s to be expected. All in all, I enjoyed boxing that I decided to keep doing it. I love how it made my heart race, how it successfully made me maintain my focus (coming from a restless person, that’s a huge statement), and the fact that it was tough yet it felt like I was just playing a game.

Kuya Edel was awesome! He was quite patient with us and maintained a good sense of humor when we didn’t get it right. It is no wonder that many customers prefer to train under him.

The trio has agreed to meet again this coming Saturday for another round of boxing sessions. Not sure what my boxing future is, but I hope that the next time I talk about this here in my blog, I have already improved a lot, not just with my boxing skills, but as far as my overall fitness is concerned. 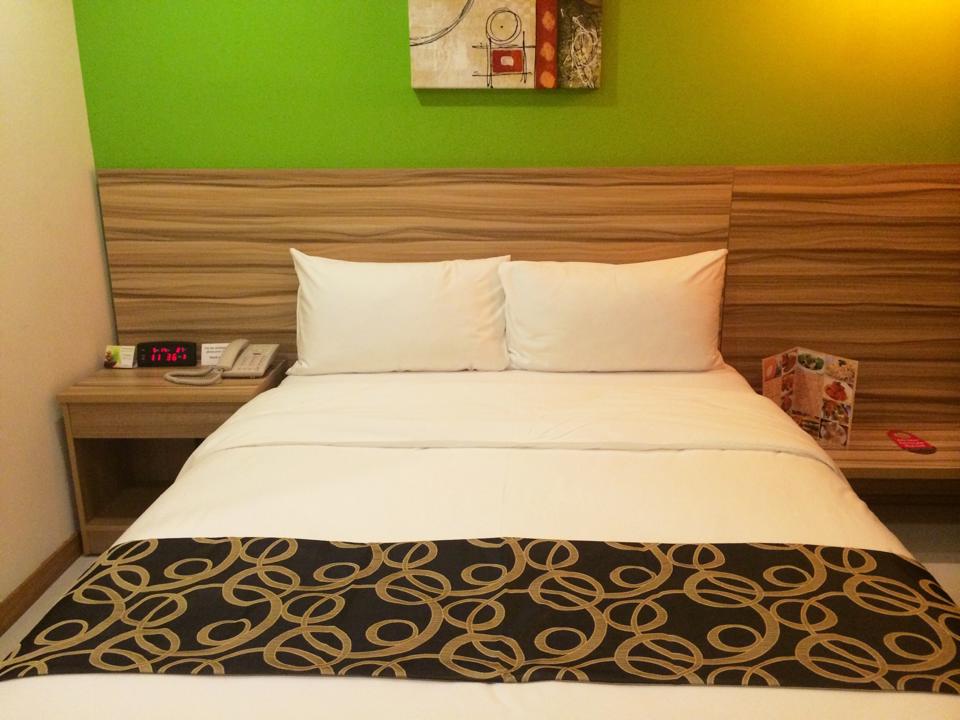 Staycation For Two At Guijo Suites

Scroll down to see next article
South Korea Travel