Just as there are no two snowflakes alike, so should the tattoos. That’s the idea, but who are we kidding? In a time where most people feel the need to share every single thing on social media, the chances of you having anything original is pretty slim. This and the fact that I cannot draw, have lowered my expectations when it comes to getting an original tattoo design. But what if you could get someone to tweak a design for you? Isn’t that option a lot better than having something permanent on your body that is 100% an imitation? Such promise is the very thing that lured me to get a tattoo by Sarah Gaugler of Snow Tattoo.

Snow Tattoo is a two years old tattoo shop located on the second level of saGuijo Cafe & Lounge. It is fairly new but quickly managed to find its way to the hearts of ink enthusiasts due to the artist’s exceptional talent for illustration. Snow Tattoo offers its clients customized designs. You have the option to get an original illustration made by Sarah or have an existing design tweaked by her so you could have a tat that is uniquely your own.
Snow Tattoo is like an antithesis of tattoo shops; no loud rock music playing, no thug-looking people hanging about, the walls are painted in white, and the place is well lit. There’s a comfy couch to accommodate the clients, interesting art pieces scattered about, and the intricate drawings of Sarah are on display. 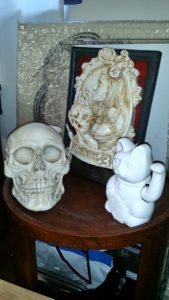 There is only one artist in this tattoo shop, Sarah, so it is quite important to get an appointment beforehand. When I mentioned earlier that Sarah is talented, I meant it by the true sense of the word. Aside from doing tattoos, Sarah is an indie actress, a music artist, and a model. Oh yeah, she’s a rock star too, Sarah and Pao are the talented people behind the electronic rock duo, Turbo Goth.

Imagine being inked by a rock artist, yes, I’m stoked! I admit that the prospect of getting a tattoo from a celebrity was a bit intimidating because it’s easier to believe that all celebrities are a bunch of egotistical freaks who think they are better than everyone else. Fortunately, Sarah and Pao are just the opposite. They arrived with big smiles on their faces and they were quite apologetic for being a bit late. No air of arrogance at all!

I carried a picture of the design that I want for inspiration. I stumbled upon this photo of a mandala which is a ritual symbol of the universe in Buddhism and Hinduism. I showed the design to Sarah and told her that I want it on the edge of my shoulder, falls a little bit on the upper part of my right arm. Upon asking what would be the damage, she answered that something that big may cost me anywhere between PHP 8,000 to PHP 12,000. My heart sank because I was only carrying 8,000 bucks. Just when I was already thinking of leaving sans a new tattoo, Sarah asked what is my budget. I said that I could shell out between PHP 7,000 to PHP 8,000. To my surprise (and utter delight), she said “okay.”

When the negotiation has been settled, Sarah got to working. I gave her free reign on how she could tweak the design so it wouldn’t be in the exact likeness of the original.

After the image transfer, the tattooing began. We were talking the entire session, which helped distract me from the pain. Sarah wasn’t selfish about sharing some information about her like her acting career. Coincidentally, I actually saw her in the film, The Diplomat Hotel. I noticed that Sarah wasn’t entirely comfortable talking about her acting career, but when it comes to tattooing, her eyes sparkled. You could really tell that this is where her real passion lies. When asked if she gets tired doing tattoos on people, she said no and shared that she once told a friend that she has so many tattoo ideas in mind it’s just that her body couldn’t keep up.

The procedure took about two hours. I swear I barely noticed the time, even the pain because I was enjoying our conversation with Sarah and Pao. The tattoo turned out to be real pretty and I love the details that she added and changed like the pearl chains.

Like me, Sarah was happy and excited to see the result of her hard work. Without a question, this is the prettiest out of all the tattoos that I have. But more than the design, the whole experience has been pleasant because Sarah and Pao were so nice to us. Already I am planning to go back for another tattoo and next time, I’m going to have an original design by Sarah.

I only have high praises for Snow Tattoo and I am recommending it to anyone who wants a design they could call their own.

PBO And The Elderlies Of Kanlungan Ni Maria