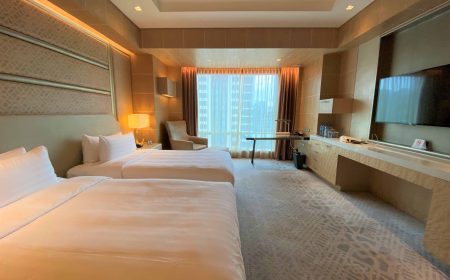 I would remember this place most for rape, not that somebody in that place got raped or something, but it is one of the most interesting topics my friend, Christine and I discussed as we finished our gelato and coffee. We were at Afters Espresso and Desserts, listed as one of the 6 coolest coffee shops in Quezon City by Coconut’s Manila.

Afters sports that industrial-themed interiors that more and more coffee shops seem to be adapting nowadays. Gone are the days when a café spells homey ambiance and comfy couches. Today they look like the way abandoned places are after they’ve been turned into living spaces. Afters caught the bug; the floors, tables, and chairs are made of wood, the concrete walls are unpainted, the modern light fixtures are supported by metal rods. Overall, I dig the look and feel of the place, especially the geometric patterns on the ceiling. 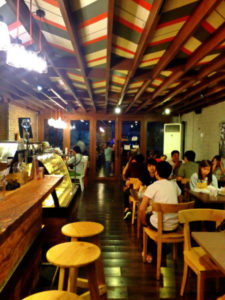 The most photographable nook of Afters is this long table by the door. It was occupied by a group of people when my friend and I came in so I had to wait for them to leave before I could take a picture of it.

Unlike most cafes that promote self-service, Afters do it the old way. I’m so used to going to cafes where you pay as you order that I had a moment of confusion when one of the staff came to our table. To be safe, we asked the waiter’s advice on their bestseller coffee. Christine ended up ordering a cup of Flavored Latte (PHP135) while I opted for Kitanglad Drip Coffee (PHP159), a medium body coffee with light and nutty, and floral undertones from Southern Province of Bukidnon. 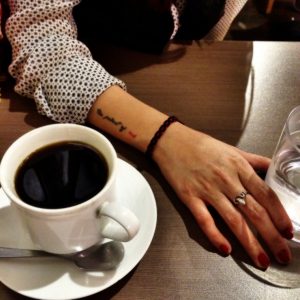 I thought the drip coffee is prepared with the glass cylinders that were on display on the bar. To be honest, that’s the reason why I ordered drip coffee in the first place. But I still had fun watching how it was prepared, albeit in a different manner. I hope I didn’t make the barista uncomfortable because I sat on the bar the whole time he was preparing my coffee.

Aside from cakes and pastries, Afters has their own line of gelato. In the counter, Christine and I bugged the barista to let us sample some of the flavors to base our order from. The calamansi flavor is exactly what it promises, with a cringe-inducing sourness.

If you’ve been reading my blog for quite some time now, then you know already I have a thing for anything caramel-flavored. Predictably, I went for the sea salt Caramel Gelato. This gelato can do wonders for coffee, especially for the latte. When Christine and I tried it with her coffee, the flavor got enhanced dramatically. I’ve never tried affogato before, but from doing this experiment I think I now have an idea what it is.

Christine picked a more sweet flavor, Stracciatella, which I wasn’t so fond of.

So that’s one cool QC coffee shop off my list. Four more to go.