Rice, Tagalog, familiar faces, these are the things I thought I would yearn for when I go to Europe. But I ended up missing the only thing I detested all my life, the sun. Having been born in a tropical country where the sun is always shining and white skin is considered beautiful, I grew up dreading the coming of summer and rejoicing the arrival of the rainy season. But after experiencing the bitter cold in France where I spent days exploring cities under a gloomy weather, I found myself missing the warmth of my country. Until I hopped on a bus and saw my first ray of the sun after 5 days in Madrid.

I took the overnight bus from Bordeaux and traveled for 8 hours. I booked my ticket at Flixbus for €90.99 (₱5,194.56). Around 8:00 in the morning, we reached Madrid Barajas Airport where I got off to meet my friend, Krizh.

Krizh has been living in Spain for years and upon learning I’d be going to Europe, she offered to host me in Madrid. We used to hang out at Greenbelt with our other friends, most of which, just like her, have already left the Philippines to live abroad.

Staying at my friend’s place at Malasaña

We took the train to Malasaña to the apartment of her godparents where she resides. It’s a one-bedroom unit with a spacious living room area and a kitchen. I met her godparents, Tita Emily and Tito Edgar, an amiable and charming couple whose kindness allowed me to have a warm place to stay during my visit.

Unlike France, there are many Filipinos in Spain, especially in Madrid. In fact, many of Krizh’s relatives have been living there for years.

Places to see in Madrid

Krizh took some days off her work to tour me around Madrid. The weather was a few Celsius higher than France but it was still very cold especially at night. The sun had me feeling like myself again. I was smiling a lot and had more energy for a day stroll.

So here are the places that we went to in 2 days.

The City Hall of Madrid was built in the early 20th century. It can be found along Plaza de Cibeles. The architecture of the building is so impressive, I mean look at the picture. It is no wonder that it has also become a tourist attraction (wish I could say the same with our own Manila City Hall but eh…). It used to be home to the Spanish postal service [hence, its former name, Palacio de las Comunicaciones (Communications Palace)] until 2007.

A corner building along Calle de Alcalá and Gran Vía, Edificio Metrópolis is owned by Metrópolis Seguros, an insurance company. The building has been inaugurated in 1911, designed by Jules and Raymond Février using the French Beaux-Arts style. It is one of the most famous landmarks in Madrid.

Puerta de Alcalá is a neo-classical monument at Plaza de la Independencia. It is the first modern post-Roman triumphal arch in Europe, even older than the popular Arc de Triomphe of Paris.

My most favorite spot in Madrid is Parque del Buen Retiro, a public park that used to belong to the Spanish monarchy until the 19th century. It sits in a 350-acre land with several Instagrammable spots like some monuments, beautiful gardens, galleries, and a lake. There are a couple of street performers too like this woman who danced flamingo as shown in the video.

Los Jerónimos, as it is called locally, is a 16th-century church located at Calle Moreto, right next to Museo del Prado. It is considered as one of the most important convents in Madrid.

Chocolatería San Gines is a café known for their chocolate con churros. They’ve been around since 1894 and it is open 24 hours. It is located at Pasadizo de San Ginés close to San Ginés church. It’s popular to the locals and tourists alike so you have to wait in a queue. The wait is worth it, the churros here are on completely different level, soft, a bit chewy, and not too oily. I thought Krizh was just hyping it, boy I was so wrong. For only €4 (₱239), you have 6 pieces of freshly cooked churros and a cup of thick, not overly sweet hot coco.

Out of all the places we didn’t enter, this is my regret. It would have been great to see a film at Cine Callos, a cinema established in 1926. Aside from movies, it is a venue for comedy acts and concerts. I’d love to go back and catch a show here next time.

Formerly called, Plaza de Arrabal, Plaza Mayor dates back to the 15th century. It is a public square with some bar and restaurants and market stalls. It is always filled with tourists especially in December for the Christmas bazaar.

A few minutes’ walk from Plaza Mayor is Mercado de San Miguel where people go to have a taste of some authentic Spanish cuisine. There you can find gourmet food and fresh produce, which I find to be on the pricey side. I was just happy taking photos because I wasn’t too keen on wasting my euros when there are good food back at Krizh’s place.

Plaza de la Villa is within Madrid’s historical zone. There you will see the Lujanes’ House and Tower, Cisneros’ House, and Casa de la Villa.

The Royal Palace of Madrid or “Palacio,” built in the year 1735, is the official residence of the Spanish monarchs. Presently, Palacio is used for state ceremonies. The royal family lives at Palace of Zarzuela.

The Temple of Debod, an ancient Egyptian temple is the most interesting thing I’ve seen in Madrid. In 1968, UNESCO relocated the shrine from Aswan, Egypt to Spain as a way to save the historical site.

Our tour concluded at Parque de la Montana where I found myself doing what the rest of the people came there to do, wait for the sunset.

Having originated from a country where the sun is always shining, I don’t make much of a spectacle of the rising and the setting of the sun. But in Madrid, I gazed at the orange glow in the horizon like I was seeing it for the first time. It is easy to ignore or underestimate of what is always there until you don’t see it and suddenly you’re made aware of its importance. It’s funny that I had to be miles away from home to appreciate what I had always loathed.

And what a marvel it is to see the sunset on that side of the world. 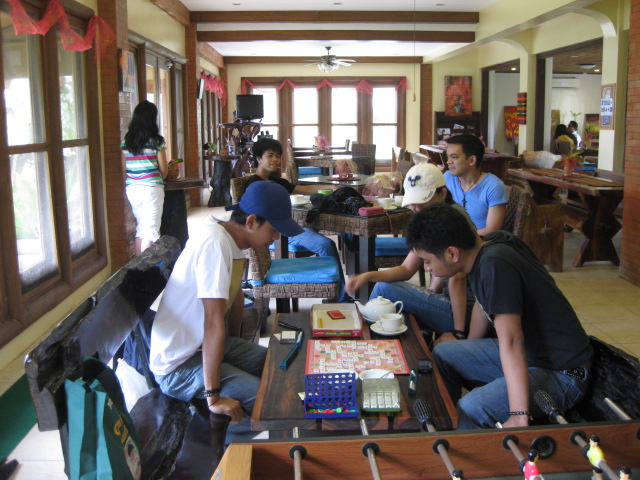