Silently Grieving On The Beautiful Island Of Maniuaya

I was feeling off, indicative of grief I could not let on. I went on this trip in a zombie-like state and I convinced myself that it’s what I needed to deal with sorrow. Last April, my aunt left the mortal coil from breast cancer and on the day of her burial, I went to Maniuaya Island in Marinduque. I know how it sounds; like I didn’t care. How could I go on and have fun while my family is mourning? You can hate me later. On to the story.

My friend Cai, organizes annual trips with a group of guys he refers to as his beki friends (Beki is a Filipino slang word for "bakla," which means gay or homosexual). This year their chosen destination is Maniuaya also spelled as Maniwaya. He needed five more people to complete the headcount required for the van service that he hired. He invited five women, myself included.

How to get to Maniuaya Island?

Maniuaya Island is located in Barangay Maniwaya, one of the 55 barangays of Sta. Cruz, Marinduque. To get there it takes five hours of land travel from Manila and another hour of sea transport.

Superlines terminals in Sampaloc, Cubao, and Alabang have daily routes to Catanuan and Mulanay. Get on on any of these buses then take off at General Luna Crossing in Quezon; fare rate is ₱320 ($5.98). From there, take a tricycle that goes to General Luna Port. Note that the boats that ferry the passengers to the island only travel once per day at 10:00 a.m. Boat fare is ₱150 ($2.80) per head and the journey takes about 45 minutes to an hour.

As with our group, we reached Quezon via van transfer, which we rented for ₱12,500 ($233.71). Cai found an operator on Facebook,  Safe Travels Transport. Given the fact that we would be spending the night on the island, I thought that the driver would join us, but he chose to stay behind; probably slept in the van.

We went to one of the rolling stores to break our fast before we proceeded to the harbor. At around 7 in the morning, the tide is still low, thus the tourists had to board those small fisherman boats to get to the ferry boat.

When our group was all aboard the ferry, our journey continued.

Where to stay on Maniuaya Island?

Our big group found a home at Pielago Beach Resort, owned by a couple, Peter and Liza Quitoriano. During our stay, Ate Liza happened to be on the island. She has a bob hair, always smiling, and you will never see her without her shoulder bag that she likes to wear cross-body. She was present but not intrusive and she made sure that we got everything that we need. She’s also pretty cool, even indulged in joining one of the games that we played during our drinking session.

The resort is beach-front, with an expansive front yard dotted with tall coconut trees. We stayed in a 2-story house with 2 rooms. The ground floor has a common toilet and bath while the room on the second floor has its own, albeit smaller bathroom. It has a kitchen, a balcony, and a veranda. Despite our big number, we were able to squeeze ourselves in the 2 bedrooms. I stayed on the master’s bedroom with 6 other people. The three girls slept on the queen-size bed, I preferred to sleep on the extra mattress on the floor.

Our accommodation arrangement includes delicious home-cooked meals, mostly seafood with vegetable dishes and a generous serving of fruits for dessert.

What activities to do?

Cai was getting antsy as he waited for us to settle our stuff in the resort. He had been to the island before, he was worried we’d miss the sandbar. This is one of the disadvantages of going with a big group; waiting time always takes longer.

Maniwaya is where I experienced the most relaxed kind of island hopping. It’s not because we were on a yacht or because we were treated like royals, but because there are only 2 islands to visit, Palad Sandbar and Ungab Rock.

Pielago’s distance to Palad Sandbar is a mere 190 meters, so close you can see the island from the resort.

We were late that by the time we reached the place, the sandbar was already submerged in water, further obscured by the boats that were docked on the side. There are many tourists swimming and taking photos, and pretty soon our group got to working. By working I mean working it for the camera, of course.

The water level reaches up until below my hips. The sandbar may be gone, but the view is still amazing. I stood fascinated at how blue and clear the water is.

Ungab Rock can be found on Mompong Island, about 30 minutes away from Maniuaya Island. This is where we stayed longer to enjoy snorkeling, and in my case, just swimming.

You can see the giant rock formation, jutting out on the shore blanketed by the trees. I just looked at it from afar and took a few photos. I didn’t bother stepping on the island and jumped straight to the water for a swim.

The Philippines is an archipelago, but many Filipinos, like me, can’t swim for shiz. In fact, only Cai was the only strong swimmer in the group. He went off on his own with his free diving gears, while I stayed afloat on the water with the life vest on.

When I grew tired pretending that I was a mermaid, I went back to the boat. As I was sitting there, wondering what time we’d return to the resort, I spotted one of our boatmen eating turon. Turon is one of my favorite Filipino snacks. It’s made of sliced bananas (jackfruit is optional) wrapped in spring roll wrapper, deep-fried with brown sugar. I must have it. Next thing I knew, everyone on the boat was eating turon. It’s important that I mention this because it’s the best turon I have ever had in my life. It was soft and warm, not too sweet, and the spring roll wrapper wasn’t thick unlike most turon in the market. What’s more, it’s cheap, only 10 ($0.19). So if you ever get to Ungab Rock don’t leave without buying that turon. Thank me later.

I had a chance to walk a little bit along the stretch of the golden-sand beach of Maniuaya. I saw a makeshift store on the seashore, a few meters away from the resort. It was selling some junk food and iced desserts, halo-halo and mais con hielo. I ordered a halo-halo and occupied one of the monobloc chairs to finish the treat while enjoying the view of the beach. I listened to the idle conversations of the locals, they all speak Tagalogs but with a different accent and intonation than the people from Manila. 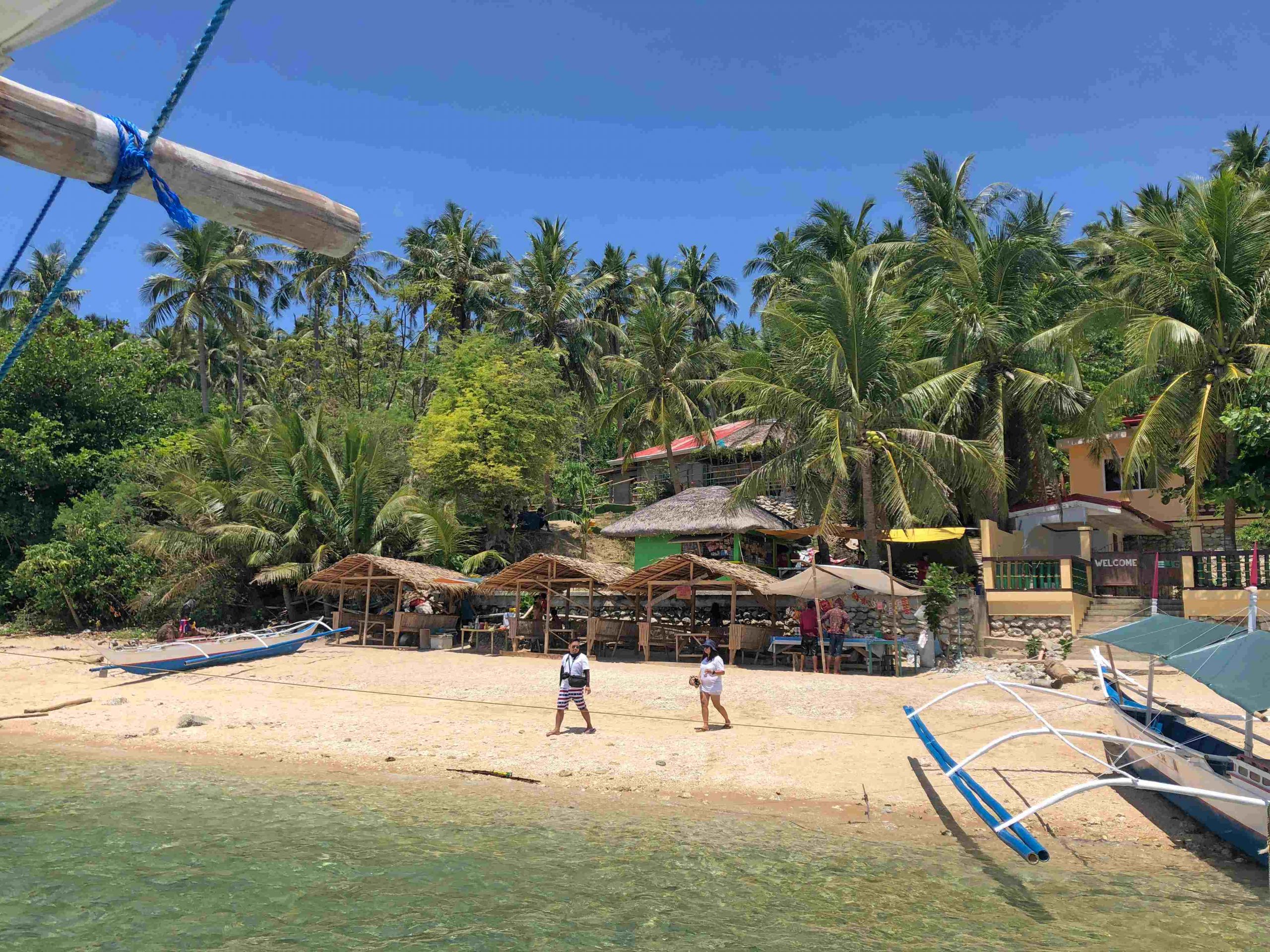 The island is generally quiet with strong cool winds that blow no matter what time of day. It was not a remote place but underdeveloped, no grand establishments like bars or restos, no nightlife.  The network signal is intermittent, in my case, Globe only works when I go by the seashore. It’s the kind of place ideal for a quick escape from the city.

Come night time, after dinner, the group gathered for a drink, Filipino style. We played games like the Kings Cup and two other games that I don’t know how to call.  There is one game that I liked better. The rule is simple, a random category is given and each one has to provide an example or a  word related to said category. The words uttered by one participant should never be repeated by another. A person who mistakenly repeats a word loses the game. The evening was long, the alcohol and the chips were overflowing, and the group’s laughter echoed through the night.

These games are meant for fun, but I think the true goal is to get everybody drunk. The punishment for losers is to drink a shot. Pretty soon, most of them were already slurring their words, some (I mean Cai) even puked. I say “them” because I was the only one who didn’t lose in the games, therefore, I didn’t have to drink as much as they did.

In a true “titas of manila” fashion, I went up to the room after three games to retire for the night.

Pielago has a cottage by the shore that all of their guests are free to use. Hanging out on this cottage, lying on one of the hammocks with my instant coffee is my most favorite moment on Maniuaya. The cool wind was blowing, the leaves and the trees are swaying, the sound and the sight of the waves helped soothe my grieving heart.

Unbeknownst to my companions, I was mourning the loss of my aunt at that time. Her interment coincided with this trip. I know that if I had chosen to back out, Cai would understand. I debated with myself whether I should go, but I didn’t want to be that person who bails at the last minute. I didn’t want to embody the kind of person that I detest. Also, I had paid for the trip, I didn’t want to waste my hard-earned money.

[Related: You were a Mother Caroline]

But I also know that these are all just reasons that I used to not deal with the guilt of missing out a sad but important family event. If you ask me whether I regret coming to this trip, I would have to say yes. It wasn’t because things went wrong or that I didn’t enjoy our short time on the island. In all honesty, it was fun; Cai’s friends are all nice, not to mention funny. The island has a beauty that makes the time stands still, the kind that pacifies a weary soul. It may very well be, just what I needed in the time I was dealing with the pain of a loss.

The regret comes from the lost opportunity to say goodbye to the person who stood as a second mother to me and my siblings. I feel guilty that I wasn’t able to share in the pain of the family. I’m sorry that I have let them down.

I found out that in the weeks before her passing, my aunt asked her sister when could she see me. I had to fight back the tears when I heard this. I was not able to see her in her final days and I didn’t send her off on the day of her burial. It honestly makes me feel like a terrible person.

Maniuaya will forever be, a sad reminder of this regret.

Scroll down to see next article
Lifestyle Product Reviews

Get Better Sleep During Long Travel With This Travel Pillow