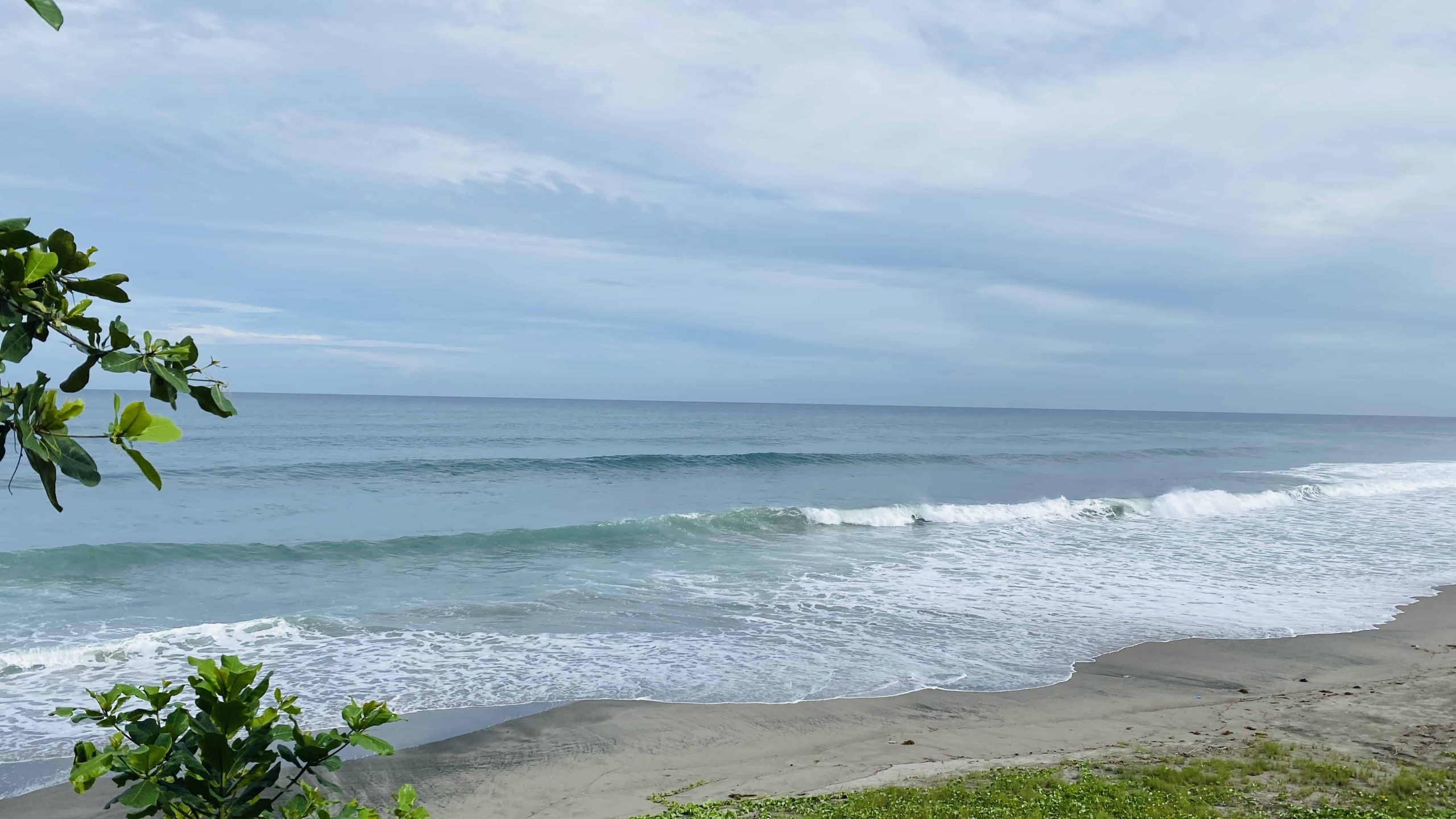 I lay flat on my stomach over the gray sand, my cheeks pressed against my folded arms, then I closed my eyes. At that moment, I felt at peace, like it was the most natural thing to do in the world. My two friends were nearby, each having their moments with the sea. The sky was gloomy that day; I need not worry about getting sunburned. My thoughts were clear, reveling at the moment that I wished would last forever. Moments later, a great rush of waves came and pushed me from my perfect spot. My body rolled down the shore as if I weighed nothing. It was as if the sea reminded me that all good things must come to an end. But instead of getting discouraged, I was more determined to repeat the experience.

And that’s what I did, over and over; lying on the sand and getting tossed back to the shore, the water and sand getting inside my ears. It was like a game, the sea a fickle lover, myself the relentless pursuer. The sea didn’t stop tossing me away, but I was just as resolute to return to her.

I will never forget this moment at Urbiztondo beach with my friends Cathy and Jon when we went there in the first week of July. Cathy had rented a room in a transient house for a month and invited Jon and me to spend the weekend with her, so we did.

This would be the third time I’d visited the province; the first was a solo trip to La Union in 2016, and the second was in June this year with friends. So yes, we went back because Elyu, I have come to realize, is fun when you’re with the right company.

Cathy married a few years ago and now lives in Germany with her husband. She went home in May 2022 for a vacation. While here, she mostly stayed with her family in her home province, Pangasinan, and spent a month in La Union.

Carpooling wastes so much time

Friday afternoon, right after my work, a carpool picked me up from Eastwood City. I found this carpool service from a Facebook group and booked a ride to La Union on that day. The good thing about riding in a carpool is that they will pick you up from your house or other chosen location (in my case, my place of work), and they will drop you off at your exact destination. The bad thing about it is that it’s more expensive (I paid PHP 1,300) and wastes so much time.

Because you’re carpooling with other passengers, it’d feel like you’re on tour with all the pick-ups and drop-offs the driver would be doing along the way. I realized now that I had highly inconvenienced myself in my pursuit of convenience. Not only did I pay more, but I also had to be on the road for a long time. In conclusion, it’s better to take public transportation. Time, at my age, is currency; the more I waste time, the more restless I become.

The drive itself was stressful because of my fellow passengers. There was a girl who was always talking with someone on the phone on the loudspeaker. The girl cursed like a sailor; it was disconcerting. I do curse sometimes, usually when I’m angry, but she cussed in every breath like it was nothing.

I sat there thinking, Girl needs to gargle with holy water. And because she talked during the entire ride⸺and chose not to be discreet about it⸺I found out that she’s close with an aunt of hers, had quarrels with many people, and has a scandal video of an acquaintance saved on her phone. Wow.

But that wasn’t all. The messenger chat sound kept beeping from somebody’s mobile phone and the young man sitting beside me scrolled through his Tiktok, also without using earphones. Basically, I was an unwilling listener to every conversation, every tone, and every video played. Seriously, what’s up with people?

As if my misery wasn’t enough, the driver dropped me off at Mad Monkey Burger Lab instead of my stop. The tricycle drivers saw me and offered to give me a ride for PHP 70. I checked Google Maps and saw that it was just a 6-minute walk to the transient house; they were obviously trying to scam me into paying more. I decided to take the rest of the way on foot, notwithstanding I was carrying a heavy backpack and that it was around 10:00 in the evening. This is how every murder story begins, I thought to myself.

A pretty chillax weekend with friends

This trip was pretty chill. Cathy was staying in a beachfront transient home, so every morning, we woke up to the sound of waves. It was humid that a slight movement undid the showers I’d taken. Cathy cooked our food most of the time, then in the afternoon, we went to the beach to take a beating from the waves. At one point, we talked about taking some surfing lessons, but the strong waves deterred the amateurs in us.

Saturday morning, we went to the public market to buy the ingredients that Cathy would cook for us. I was in a daze, wanting to buy all the rice cakes and other local desserts I laid my eyes on.

We also went to some cafes and restaurants in San Juan; gossiped over coffee and bread at MASA bakeshop, had pizza and pasta at Kermit La Union, and enjoyed iced matcha lattes at Puesto d’ Cafe.

I had been despondent that week, so I appreciated my friend’s company. Jon’s jokes and Cathy’s peals of laughter kept my demons at bay. We were having so much fun that I had forgotten I was supposed to share the root of my anxiety with them.

I’ve noticed how much Cathy has changed. She used to be so out-of-touch, but now she can participate in discussions where the topics are deemed uncool yet necessary, such as the recent presidential election. Even her demeanor has changed. She was very bubbly, laughed like there was no tomorrow, and couldn’t sit still, like a kid who never runs out of energy. While she remains warm and friendly, now she moves with finesse and grace.

Everything about her has improved, from how she talks to how she dresses. She credits this to living abroad, fully adapting to the way of the Germans, where people regard rules as rules, not a suggestion. She would even remind us to wear our masks whenever we went out, a far cry from the girl who was the most carefree of the lot. Sometimes I stared at her, wondering where my old friend had gone, but out of fascination rather than disappointment. Change is good and I think it suits her.

Sometimes we get a glimpse of her old self whenever Jon cracks a joke. She laughed like it was the last time; her voice echoing through the whole house.

Jon used to be the least invested in our group. He didn’t travel with us that much and hardly joined our meetups. This year, however, Jon had dealt with some life changes that subsequently altered the way he communicated with us. These days, it’s easier to convince him to join our trips and get-togethers.

I went home that Sunday night by another carpool; just like the first one, this trip took an eternity. The only consolation is there were no pesky personalities in this ride. My fellow passengers were generally quiet.

Once upon a time, I had no trouble finding sleeping during long land travels, but for some reason, I seemed to have lost the ability. I was wide awake the entire ride, which made me quite anxious as I was going to work that Monday morning. I was the fourth passenger to be dropped off. By the time I reached home, it was already around 4:00 in the morning.

I wish I could have stayed longer in Elyu. I wanted to explore more, spend more time with my friends, laugh until my belly hurt, and forget about the loneliness that had been eating me these past few weeks. But just like what the sea reminded me, all good things must come to an end.