Caver Or Spelunker? There Is Something For You In Quirino Province

I must admit, spelunking does nothing to trigger excitement in me. For me, there is nothing thrilling about fumbling through the darkness, crawling through small spaces, smelling the odor of moist bat guano (or touching ’em albeit accidentally), and worrying about where you should step on so you don’t slip and break your neck, or worse, fall into a pit. I know there are people who find a sense of exhilaration in exploring these hallowed grounds; they wear proper clothing, are fully equipped, and they like to call themselves cavers instead of spelunkers—the latter term being associated with the uncultivated crowd who go to caves for Instagram purposes (if you know what I mean). Of the two, I categorize myself as a spelunker in a sense that when I go to a cave it’s because it’s part of the itinerary. Whether you are a spelunker or a caver, it might interest you to know that in Quirino province, there are caves you can explore. And I was able to visit two of them; Aglipay Caves and Diamond Cave.

In the village of Villa Ventura in Aglipay lies an eco-tourism site that protects a series of caves called Aglipay Caves. There are over 37 caverns in the area but only 8 are opened for tourism purposes. There are only 6 guides available to lead the tourists inside the caves; we were accompanied by two, Vergel and Jun. Given the fact that they aren’t many tour guides available, we had to join another group.

As soon as we reached the jump-off point, Vergel started his guide duties in which he explained how we would go about exploring the caves. His voice laced with thick Ilocano accent told us to never touch the stalactites and the stalagmites, a standard caving protocol.

He said we’d enter Cave 1, go through a forest, enter Cave 8, which is linked with Caves 2 and 3. Yes, in that order. Our adventure began a little after 1:00 in the afternoon. As mentioned, not all caves can be explored and there are those that you can enter upon request.

If you’ve survived Sumaguing Cave in Sagada, Aglipay should be easy for you. The only challenging part of exploring this cave is when you have to squeeze through some narrow tiny holes.

There is a section in the cave in which you have to do a duck walk due to the low ceiling. Reminds me of the time I crawled through the Cu Chi Tunnel in Vietnam.

As we walked through the forest, I noticed the look of extreme displeasure on my friend’s (Silver) face. I came up and asked what was wrong; apparently, the guy from the other group touched the stalagmite formation right after our guide reminded us not to do so. I shook my head in disappointment, frustrated why some people are incapable of following the rules. If you are going on a cave, don’t be this kind of douche.

Do you want to visit Quirino? Click here for my travel guide

Pressed with time, we no longer requested to be shown the other caves.

I have lost count of the locals who recommended that we visit Diamond Cave. This is one the attractions that you can see in the municipality of Nagtipunan. Again, I wasn’t too keen on going, thinking that we already did enough caving on this trip. But our tour guide, John, included this in the itinerary anyway so I just went along with it. We met John after we took her mother’s offer for a van tour around Quirino. After visiting, I now know why they are so proud of it. Diamond Cave is quite fascinating.

Going there, we pass through a creek, a man-made fall and swimming pool. I was so taken by the view I made sure to take pictures. 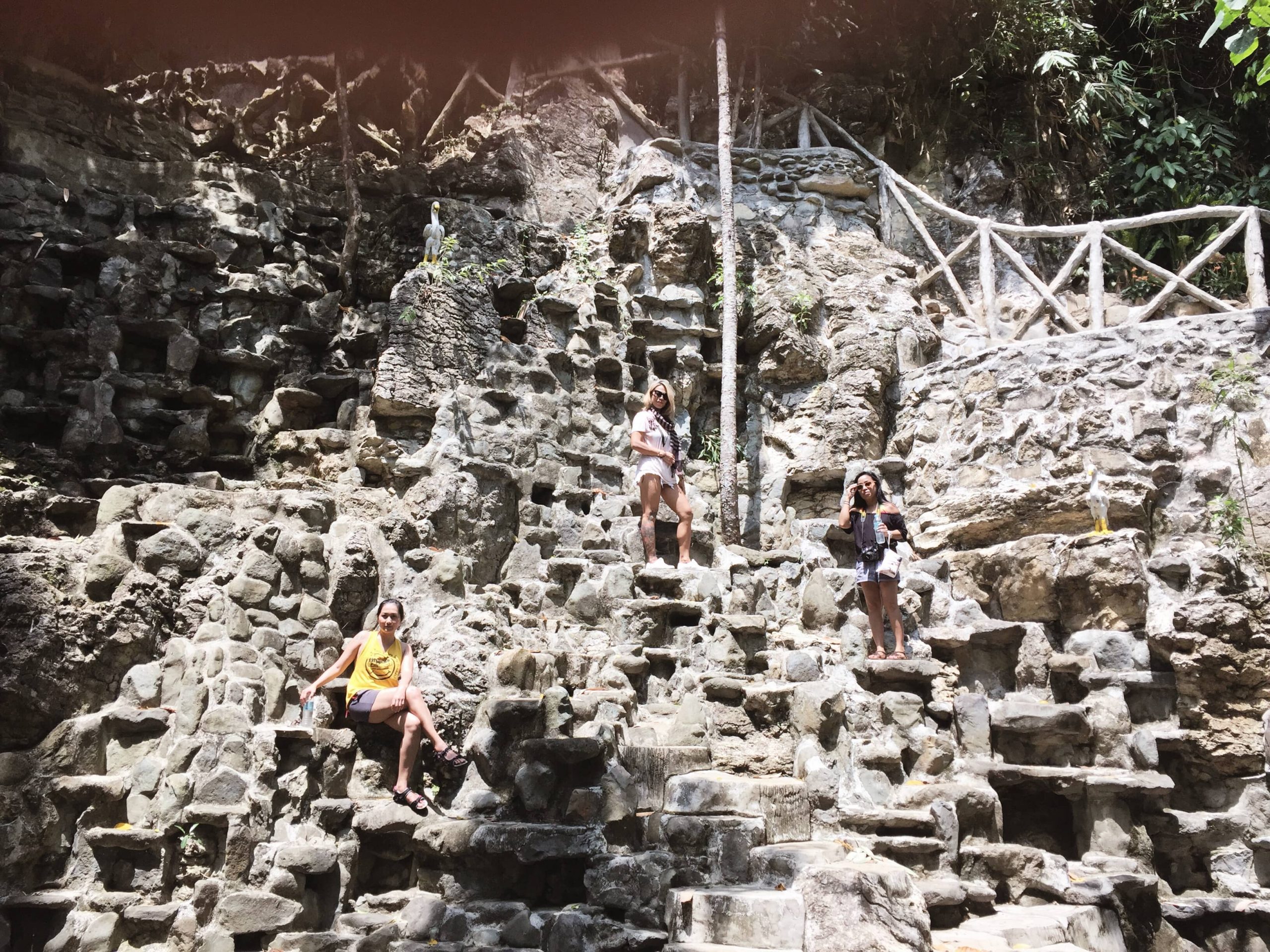 We saw a few men hanging out right in front of this stone stairwell that leads to the cave. Their mouth and teeth were all red from chewing betel nut. They said that all the guides were inside so we had to wait. Moments later, they decided that one of them would serve as our guide. Now I didn’t bother getting the name of this guide because we were very displeased with his service. More on that later.

So we climbed up the stairs, to the mouth of the cave. John acted as our second caving guide. He proved to be more useful than the clueless guide; from now on let’s refer to him as CG.

The trail was fairly easy in the beginning; the pathways are wide and relatively dry. I found myself enjoying the trek in spite of myself. The guides did not let on why it’s called Diamond Cave and have us figure it out for ourselves. We reached an area with rocks that gleamed under the light. Upon closer inspection, I realized it’s caused by water dew. From a distance, these water dew looked like diamonds. It was a sight to behold; no wonder the Quirinians are so proud of this cave.

Further on, the trail became wet and slippery. We had to walk through pools of water that sometimes go as high as above my knees. There’s a waterfall inside this cave, but we didn’t bother visiting it. The reason being CG’s inefficiency.

First of all, he was only lighting his way. He would walk ahead of us, not bothering to direct the flashlight to where we were walking. He was also quiet, never told us anything about the cave and he could barely speak in Filipino.

We reached a section of the cave that looked like a tunnel. Up ahead there was nothing but darkness and for some reason, it sent chills right up my spine. My friends seem to share the feeling when I read anxiety on their faces. CG and John debated whether we should go ahead and take that path or go back to where we came from. We walked for over an hour, I didn’t want to go back, but at the same time, the thought of going to that tunnel worried the shiz out of me. We decided to continue and I tried my best to control my fear. The path turned out to be a dead-end. CG finally admitted he wasn’t one of the authorized guides and the last time he went inside this cave was when he was in grade school.

We were shocked. Did he just seriously say that the last time he went there was when he was just a kid? I chewed the inside of my cheeks to stop myself from summoning my inner Hulk. Silver noticed that I was unusually quiet, sensing the stress that I had been feeling. To relieve my anxiety, she took it upon herself to guide me through the rest of the trek and to be honest, she’s a lot better than it than CG. Our other friend, Pancake was assisted by John, who acted how a guide should; reliable.

The caving lasted for 1 hour and 20 minutes.

There’s still a lot to improve on to make the caving experience less stressful than it should be. But despite some setbacks, I’d still encourage you to not miss caving when you visit Quirino. Now that we’re at it, let me put out some helpful tips:

Landingan Viewpoint - A Dose of Magnificent Views In Nagtipunan, Quirino