A Side Trip to Sumbrero Island

“We don’t want to shower!” said my friend.

We weren’t informed that when you pass through Philpan to get to the boats, you would be required to shower in this resort. Again, I was willing to take a shower, but I wasn’t about to shell out 60 pesos for it; not unless I’d emerge from the bathroom looking like Kristine Hermosa. The staff of Philpan didn’t take it too kindly. When our boatman told them that none of us were willing to shower in their resort, they shut the gate to us. They were like, “So you don’t want to shower here huh? Then you’re not allowed to pass through!” What is the world coming to that some resort is now forcing people to use their shower in exchange for passing through their vicinity? [Read: Why it’s hard to Climb Mt. Gulugud Baboy]

So if you don’t want to be forced to pay a ridiculous amount of money just to shower and if you don’t want some weird woman throwing profanities at you, request your boatman to NEVER LEAD YOU THROUGH PHILPAN. If you want to shower, don’t worry, there are people within the area who are offering their homes for this purpose and it wouldn’t cost you an arm and a leg.

After the morning drama, we sailed out to the sea for 20 minutes. Sumbrero Island got its name from its shape; from afar, it looks like a hat.

It’s just a small island, its white sand bedecked by crushed corals. It’s amazing that only a few hours away from Manila, there is a beach as beautiful as this, and this is coming from a person who has already seen some of the best beaches in the Philippines.

The island is privately owned by a man named Ed Mendoza, according to the boatman. There are some people manning the island including this old dog who seems to be enjoying the island vibe. I would too, I mean just look at how beautiful it is. 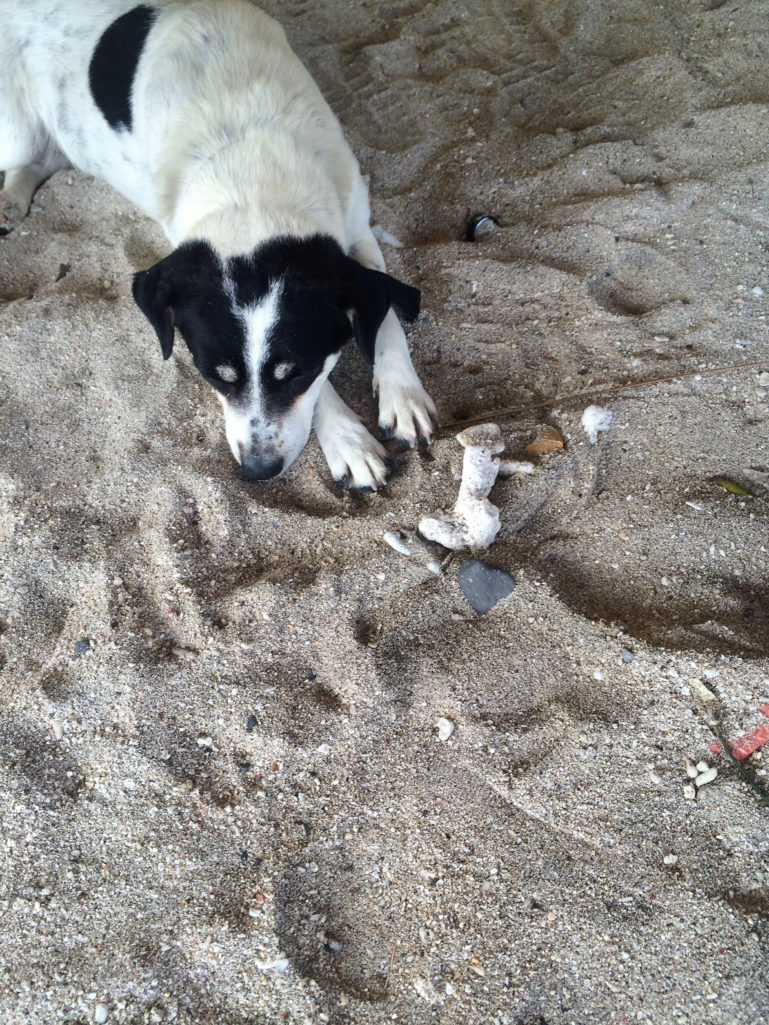 The water is clear and teeming with jellyfish, yes, that little cute pinkish creature that stings. They are everywhere so be careful when you take a swim here. My friends did get sting a bit but they said it was bearable. Nah… I didn’t want to risk it. So I was out of the water the moment I heard one of my friends said that she saw a jellyfish.

We were there for 2 hours, spent on either taking pictures or swimming. I almost didn’t get to see Sumbrero Island because of the thing with the Philpan staff, good thing my friends decided that we go as planned. Going back, the boatman docked elsewhere. We had to walk a long way back to the registration point but it was okay. I was able to get that much-desired shower in the house of Ate Lisa for only 25 bucks. She’s one of the people manning the registration point for the mountain climbers.

If you are going to Mt. Gulugud Baboy, I suggest that you take a side trip to this small island. Just remember where not to go if you don’t want the stress of being forced to shower.

You may view or download my itinerary for Mt. Gulugud Baboy and Sumbrero Islands trip by clicking the image below ↓ .

How holding on a little bit led me back to Australia

Scroll down to see next article
Travel Bug