I didn’t lack inspiration for my itinerary in Taipei; I had friends who were generous with their suggestions on where I should go and what I should do. One even sent me a copy of her itinerary when she went to Taiwan. Despite this, I went to Taiwan like I had no idea what I’m about to do. I have forgotten about the suggested itinerary, the transportation and spots to visit, and other pieces of advice thrown over chat conversation. Yes, I can be an askhole. There are dangers in refusing to acknowledge in other people’s advice but I can definitely understand the lure. The prospect of finding out things on my own was delicious for me. This is how I found out TourMeAway while randomly googling for things to do in Taiwan. I discovered that there is an option to see Taipei by joining a small group of tourists in a tour led by a few locals. And the best thing about it, it’s free.

But first, the video that I made of the tour.

TourMeAway offers free English walking tours in Taipei by a group of travelers from Taiwan who like to call themselves the TMAyan Tribe. The group offers different kinds of walking tours that would expose you to Taiwan’s history, culture, lifestyle, food, even nightlife. They have 6 kinds of tours, such as Old Town Taipei, Taipei Chill Out, Longshan Temple Tour, Hunger Game, Pub Crawl, The Vintage Tour, and Private Tour.

I booked the Taipei Chill Out tour on their website. This one is available every Thursday and Sunday and begins at 2:00 p.m. The tour lasts for 3 hours and the meeting place is at Da’an Park Station. I was supposed to go with Christine for this tour, but she failed to show up in time.

We were guided by 3 TMAyans, Kai, Bridget, and Pin-Ye. All of them speak good English most especially Bridget. We started by introducing ourselves with one another, there were Chinese, Americans, Argentinian, Australia, etc. I was the only Filipino in the group.

This tour would take you to places where you can simply take it easy or chill. If you are a hipster or have a hipster tendency, this is for you. In 3 hours we were led to the following locations: Da’an Forest Park, Heaven Road, Qingtian Neighborhood, Yong Kan street, Antique Boutiques, and Chiang Kai-Shek Memorial Hall.

Da’an Forest Park or Daan Park is a 26-hectare public park that locals like to frequent for various outdoor activities, such as picnic, roller skating, strolling, jogging, bird watching, among others. It was opened in in 1994 and it is meant to function just like other city parks like the Central Park in New York, USA and London’s Hyde Park in England.

It has two ponds, pavilions, strolling paths, skating rink, jogging loop, playground, an amphitheater, and underground parking garage. The park is also home to a variety of animals, in fact, in the pond I’d seen some turtles and birds of different kinds. Also as I was walking there I spotted a man feeding a squirrel from one of the trees.

The park is not just for recreation, Kai said that Taiwanese also use it as an evacuation center when there are natural disasters such as typhoon and earthquake. About the typhoon, apparently the Taiwanese people like them because it usually leads to suspension of school and work.

Our second stop is Xinsheng South Road also known as Heaven’s Road. Kai let us guess why this long stretch of road is called as such but nobody was able to come up with a wild idea. When I saw a Catholic Church, I thought that answers it, maybe it was called Heaven’s Road because of this church. My hunch wasn’t right but it wasn’t entirely false either. You see, Heaven’s Road is named so because of the 7 religious buildings that are lined up on this road; there’s a church, a mosque, temples, and shrines.

Somewhere along the road we turned right to what they call as a “hipster neighborhood.” It’s called Qīng tiān where residents are on the affluent side. Here you can find Japanese-style dormitories, antique shops, fashion boutiques, restaurants, and tea shops. 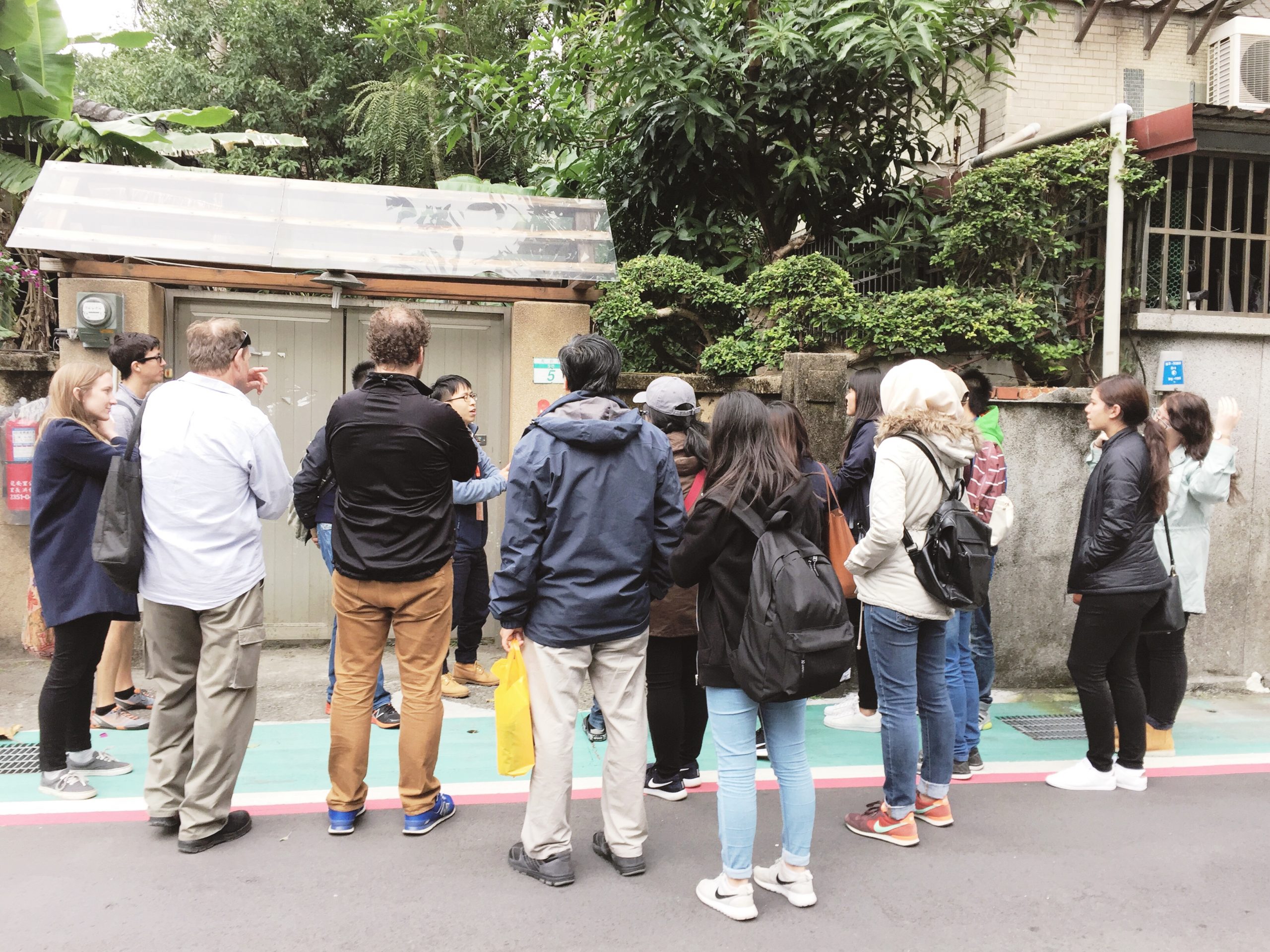 More than the hipster vibe of this neighborhood, the most memorable thing that I found here is a taxi and a car who met on the intersection. Why were there memorable? Well, they freaking blocked the road for more than 30 minutes because none of them wanted to give way to another. I swear to you they made quite a scene that I wasn’t able to listen anymore to the guides because I was busy waiting for the two vehicles to move, wondering who would be the first to surrender

We entered an antique market where you can also find bricks of teas. Those big round things wrapped on paper in the photo below, those are tea bricks. Taiwan has a big tea culture, in fact, it’s the home of the bubble milk tea. Bridget said that they have 4 kinds of teas; oolong, green tea, black tea, and oriental beauty tea. They love tea because of its medicinal properties to help combat the 3 Hs: Hypertension, Highblood, and High sugar.

By 4:00 p.m. I was ready to eat. Good thing we already reached Yong Kan street where found a string of food establishments. The guides recommended that we try the scallion pancake, bubble milk tea, beef noodle, and mango shaved ice. However, they only gave us 30 minutes to buy the food; they were pretty strict with time, so I didn’t get to explore Yong Kan as much as I would have liked.

Out of all their recommendations, the only thing that I was able to buy is chocolate milk tea from 50 Lan (50嵐). Frankly, the milktea tasted no different from those that I tried back home. I also had the most delicious calamari I have ever tasted in my life! But let’s save that info for later when I wrap up everything that I have ever eaten in Taiwan.

And the last stop of our tour is one of the famous tourist spots in Taipei, Chiang Kai-shek Memorial Hall. Chiang is a former president of the Republic of China and this memorial hall was built to honor him. You can read more about this place in my previous post on this link.

If you want to take this tour, here are a few things that you have to remember:

All in all, the tour has been great. True to its word, it was chill and relax, the guides are well informed and eloquent in English and I was able to discover some parts of Taipei that I wouldn’t have known had I not joined this tour.

Would I recommend TourMeAway, 100% yes. In fact, I am thinking of booking a tour with them again when I return to Taiwan.

If you too want to book a tour with them, here is the link.

Scroll down to see next article
Product Reviews