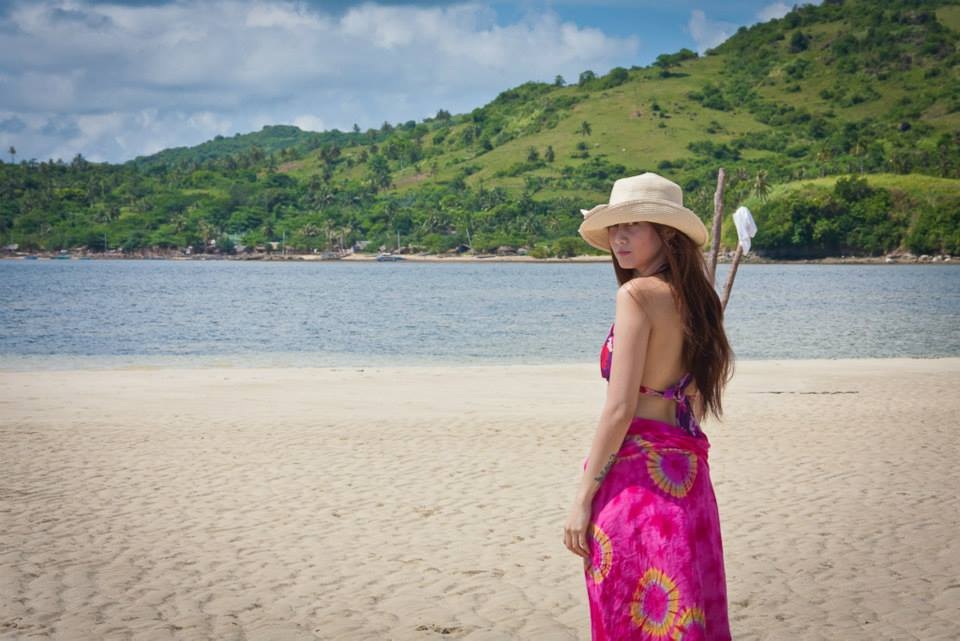 “I love basking under the sun,”

is not something you’d hear from me, ever. I was never a fan of beaches ’cause I hate getting darker, I hate that clammy feeling when it’s too hot, and most of all, I hate getting sand inside my bathing suit. Given this, I wasn’t too keen on going on an island-hopping adventure when we were in CamSur. This, of course, didn’t leave my cranium for fear that my companions would leave me out on the sea. Yet even when I wasn’t excited about it, visiting the islands of Caramoan turned out to be one of the most fulfilling experiences I’ve had in my sordid life. And now let me give you a preview of the beauty that awaits you in Caramoan.

The first island we went to was Lahus, with an off-white-colored sand flawed by some pebbles, twigs, and leaves from the trees. I call it a double beach because there’s water on one each side of the coastline. Just to give you a better picture, here’s one side of the beach:

Since the boats were on that side, people preferred to go swimming on the other side of the shore. My companions jumped in the water as soon as they could. I, on the other hand, decided to just sit in the shaded corner. The reason I didn’t go swimming here… the crowd. It means if we could use Foursquare on this island and everyone decided to check in, we would all win the Swarm badge.

Matukad has a whiter and finer sand, bedecked by lush greenery and jagged rock formations. Out of the three islands we’d been to that day, Matukad is most memorable simply because that’s where I had my first ever rock climbing experience.

Now I’ve always wanted to try the sport, but I never imagined myself doing it on shorts, flip flops, and bathing suit. We had no gloves, no daisy chain, no helmet, no shoes, and no ropes. It was a climb-at-your-own-risk thing, no medical personnel to assist you should you have the misfortune to slip and fall.

In our group, only four of us decided to make the climb, Martha, Jb, James, and I (the same people I was carpooling with during the trip). The climb may be dangerous, but there were many tourists who actually took the challenge. Our tour guy said that the climb would allow you to discover the Hidden Lagoon. I wasn’t so sure if the view was worth the risk, but I have always been a “try-for-the-sake-of-trying” gal, so I went along.

I’m not going to lie, the climb was far from easy. The rocks were sharp, irregular, and rough. I had a hard time grasping the ridge of rocks and since I do not possess a pair of strong arms, propelling myself upward proved to be a difficult task. I got through the activity by relying on the strength of my legs, gingerly stepping on protruding rocks, testing if it would take my weight, then pushed myself upward. Whenever I lost my bearing, my companions pulled me back on track and guided me. Also, I had to keep reminding myself that death by falling off the cliff is not my idea of meeting my maker.

After like a gazillion years, sweaty armpits, few bruises, and scratches, we finally reached the top and discovered the beauty hiding beyond those rocks, the Hidden Lagoon.

I thought that was just it, you sweat, you strain your arms and legs, you risk your life, just to see a lagoon. What I didn’t know is that the lagoon has a single resident, and it’s actually the reason why tourists make the perilous climb. They call it the “mystical bangus,” a fish, which according to the locals used to have a companion until one fisherman caught it and fed it to his family. Unfortunately, the whole family died after eating the fish. For this reason, nobody dared to seize the other fish. The story of the mystical bangus didn’t reach my knowledge until we were back in Manila. Martha said that Roy mentioned it, but if he did I sure as hell didn’t hear it. Had I known I would have gone all the way down to see the fish. Geez!

Going up was hard, but I found the descent much more difficult and scary. There’s the fear that the rocks wouldn’t hold my weight or I’d slip and if that happens, I’m pretty sure I wouldn’t leave the place in one piece. Roy, who obviously climbed many times before made it look easy. Hell, he was even carrying my bag!

The tide was high when we reached the island and the sun was beginning to set so the heat had toned down. Out of the three, Busdak was my favorite because that’s where I was able to take that much-needed swim. There weren’t many tourists too so everything was just calm and peaceful. Finally, a place to relax.

Rock formations and trees were more pronounced in this island. In fact, the high tide completely submerged what little stretch of sand it has. I also noticed that the water has a nice blue color, a bit darker than the waters in two previous islands.

It was high tide when we reached Manlawe so the boats had to dock far from the shore. I noticed there were floating cottages made of nipa and bamboo, which you can rent to leave your things by for over a hundred bucks. We had to walk a long way to get to the sandbar. The water reaches below the knees. It was kinda like walking in a flood. To our delight, the island is teeming with starfish. I was also amused by the seaweeds that looked like loofah net.

Manlawe is special to me, just because that’s where we had our “photo shoot.” I learned that Martha’s friends love photography and she said that in most of their trips, they always make her their model. I didn’t understand her better until I got to experience it myself. Macky, James, and Mark just turned this silly fantasy of mine to be a model into a reality. Suddenly they were taking my photos all at the same time.

By the time we reached Bugtong island, the sun was already high. Like Manlawe the island has a stretch of beautiful white sand bars. There were more people here enjoying the sand bar, swimming in shallow waters, getting their tan, okay I spoke too soon…

Since we reached the place at noon time, Roy, our tour guy, had to pack our food. We had our lunch in this floating cottage that we rented. We had sweet and sour fish, lechon kawali, and Bicol express. Out of the three, the latter is my favorite. And I tell you you must try authentic Bicol express, definitely tastes way better than the ones you can buy in the city. We saw coconut vendors in small boats, and to complete the island vibe, we bought ourselves fresh coconut juice.

Bag-ing boasts of great rock formations and little caves. You gotta be careful when you go swimming here because the beach has an abundance of jagged rocks.

I had a little photo shoot here too, courtesy of Roy. He actually volunteered to take my photos, even suggested perfect spots for my background. This is one of the pictures that he took of me. I am sorry I am not blessed with an FHM-material body so please forgive me (#sorrynatalaga #pagbigyannyonakoulit). By the way, this is the first time I walked around in the beach in a bikini. Usually, I always wear shorts so really, this trip did something to me. I must be drunk here or something, joke! This is where I went swimming. Yes, I skipped the activity in the two previous islands because it was too freaking hot.

According to Roy, Sabitang Laya is the favorite venue of the Survivor show. When we got there, nobody were still interested to go swimming anymore. Maybe it had to do with the fact that it was the ugliest… okay that’s too strong a word… the least pretty among all the islands we’d been to. [Read: West Peninsula Villas, The Best Accommodation in Caramoan]

The islands were ruggedly charming, the rock climbing activity was one for the books, and my travel companions were fun to be with. This has been my first ever island hopping trip and I gotta say that the experience was nothing short of exceptional. 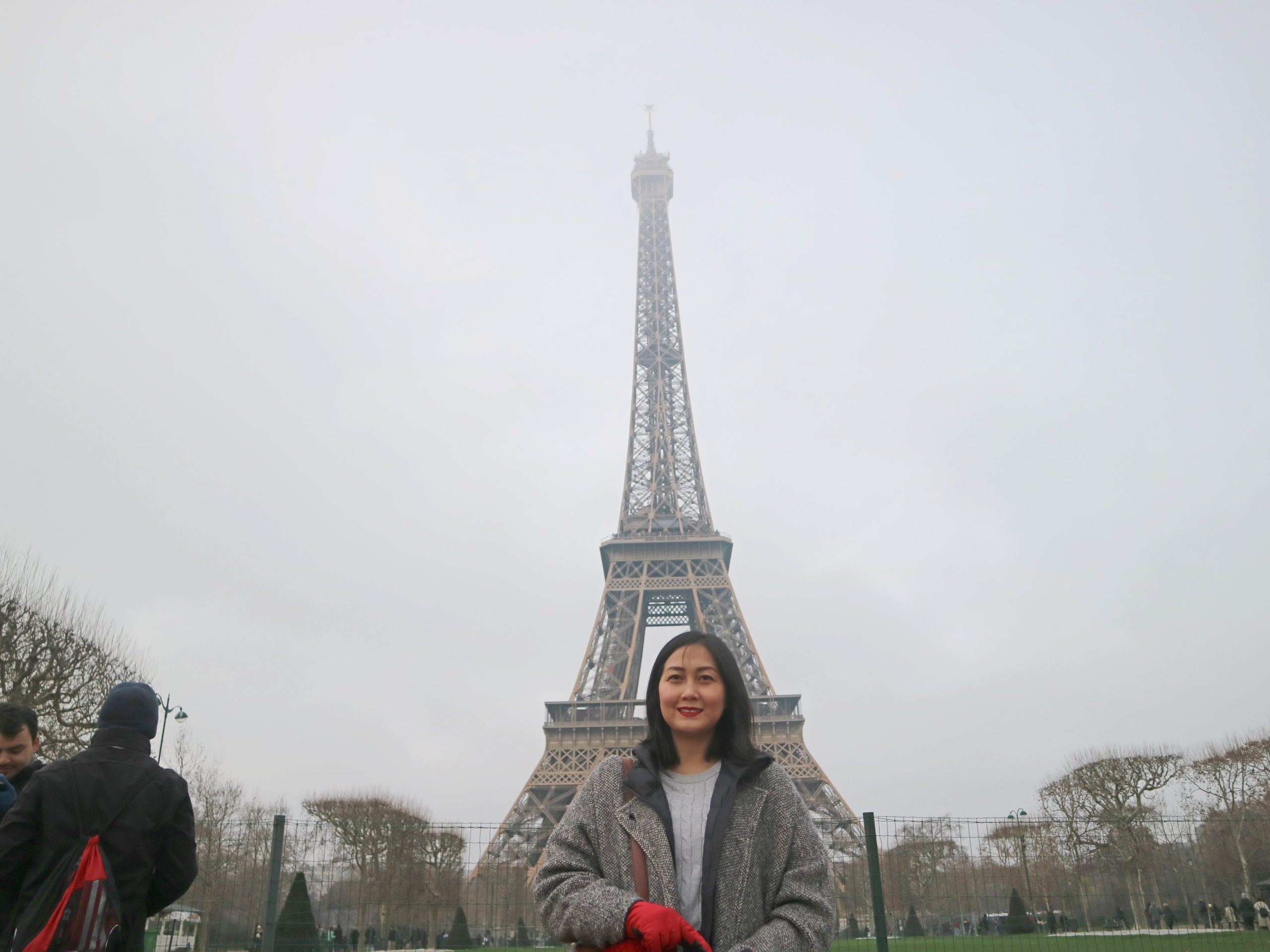