I was so sleepy I almost slept in the car. I reached Intramuros in no time and thought about how this place is a huge part of my life, having spent my whole college years within this walled city. I’m returning to attend a wedding of an acquaintance, a fellow blogger whom I have encountered in some blogger events. Given the fact we’re not really close, the invite came as a surprise to me. I thought maybe she was being courteous since she met us (I including the other bloggers who were also invited) in some events. But then again, we did talk a few times, even shared stories with one another, so maybe that accounts for something. I don’t know, I certainly don’t want to question her reason for inviting me, in fact I am flattered. So maybe she thought I am a more of an acquaintance. I do know a little bit of her story with the man she’s marrying, they’ve been together for a long time. There was even a time when I asked her if they already have plans to get married, she said none at the moment, but she is willing.

And marrying she is going to do that afternoon. I wore a long dress the color of blush and a skin-toned pair of heels. As I walked toward the church, I saw a small crowd gathered by the entrance. The doors of the church that reach the ceiling are closed, standing before them is the bride wearing the most beautiful wedding dress I’ve ever seen.

The bride walked down the aisle. I then hurried inside hoping to find a familiar face; there is none. This is one of the challenges of being a socially awkward person. Instead of talking to people and perhaps make new friends, I stood there not knowing what to do. Then I decided to just sit on a pew and wait for the ceremony to be over. Because I couldn’t find an acquaintance I wondered who should I ride with in the reception, but that’s not the least of my problem. My biggest concern is that I don’t know where the reception would be.

To make matters worse I don’t have Facebook or messenger on my phone (it was in the middle of my social media detox) and I don’t have the contact numbers of the bloggers who were also invited. It wasn’t like I could just come up to the bride to ask her a question as stupid as where is the venue of the reception. It’s not like she didn’t send me a wedding invitation the color of burgundy complete with a map of the location. So yeah, that would be weird to ask the bride in the most important day of her life.

So I sat on the pew and stood up and sat again depending on which part of the mass we were. That’s the thing I certainly don’t miss when coming to church; the rituals.

My mind ain’t functioning well. Despite my 14 hours of sleep it felt like I only slept for 2 hours. I kept yawning and I wanted to stretch my body on the pew and let them all finish the wedding then I’d wake up and it’s eating time. Don’t worry I didn’t enact the fantasy. So I sat there and heard the priest asking the bride if she takes the groom to be her husband when I noticed that the name of the groom was unfamiliar. So I thought, maybe it’s his full name, maybe what I knew of his name is in fact, his nickname. Then it was the groom’s turn to know that the bride is not backing out from this commitment. Weird thing though, her name is also unfamiliar.

So I noped out of there and hoped that nobody paid attention to this girl on a pink-colored dress, leaving as the wedding ceremony comes to an end. At the back of the church stood waiting the entourage of the wedding that I’m supposed to attend. Goddern it, I attended the wrong wedding. I went outside, to the sweltering weather. No sooner than I did, I started sweating, not sure if it’s due to humidity or embarrassment.

This is all my fault. I received a wedding invitation, I should have read it. I was careless and stupid.

Finally, the “wrong wedding” has ended and people started going to the exit.

A few minutes later, the “right wedding” begins and there goes me, entering the church once more. Again, my fellow bloggers were nowhere in sight. Obviously they were just attending the reception. I was there thinking why didn’t I do the same thing? It’s not like the bride and the groom would mind if I didn’t show up in the church. I’m not a family and I’m not a close friend; I was just among the well-wishers.

This time, I knew the bride and the groom. And I heard that the priest kept on mispronouncing the bride’s name. If it wasn’t rude I would go up there and tell him to freaking get her name right. I sat there imagining that if I were the bride and the priest asks me the question but mispronounces my name, I would say something like, “Father, I don’t know who you’re asking, but I am the one getting married not some girl you keep on mentioning.”

Again all in my head.

When the wedding is over, I Uber’d my way to the venue of the reception. I managed to get the number of one of the bloggers who was also attending and he was kind enough to tell me where the reception is.

What I didn’t know is that we still needed to wait for 4 hours before the reception. Remember when I told you that I was very sleepy? It seemed to increase tenfold. I sat on a chair, folded my arms on the table, rested my head on them, and took a nap. It wasn’t an easy nap because I was conscious of the people around who might have frowned upon the fact that I was there sleeping. I remember dreaming so I knew that I slept, but I wasn’t able to fall into a deep sleep.

After 30 minutes I went to the cafe and ordered coffee. It did alleviate my sleepiness for a good 10 minutes, afterwards, I was ready to collapse again. Admittedly, I fiddled with the idea of going home. I was able to attend the wedding ceremony anyway, I was not needed in the reception. Yes I was hungry, but the call of the bed is much stronger. My blogger friends texted that they were on their way so I decided to hang on, and I am not sure how I was able to keep myself awake.

At 7:00 p.m. I went back to the reception hall and found the organizers still dressing up the place. I saw a woman holding up a mic and she started singing a Chinese song. The bride and the groom are Chinese-Filipino by the way.

I remember thinking that her voice is beautiful and wondering what she could be singing about. Was it about finally meeting your one true love? Was it about a heart that mended? What is about wishing someone happiness? I don’t know. But whatever I couldn’t understand with words I could with emotions. It couldn’t have been anything but love, I decided.

I wasn’t sure what to feel about witnessing how people decorated the place, but I did love the result. It was absolutely beautiful, one if not the most beautiful wedding receptions I have ever seen.

Finally, my blogger friends have arrived and they were dressed to the nines. I was wearing a long dress, not a gown unlike the two female bloggers. Even so I liked my dress, besides, the only gown that I have own is an Anne Boleyn costume. I’d be way overdressed if I don that gown. What I was insecure about was the faded color of my hair; half of my roots have grown out so the lower part of my hair looked orangey and dry, god I hate it.

Eventually, the bride and the groom have come and I couldn’t help but smile when I saw them. My, how time flies. It doesn’t seem so long ago when I met the bride for the first time. When she talks, she maintains a smile and that’s the first thing that I noticed about her. She is successful in her career, has her own car, she used to be a vegetarian. She is one of the few food bloggers that I truly admire, heck she is even better at it than me. When she writes about a dish, she’s so detailed you could almost taste it.

And now I was there, attending her wedding to the guy she has been with since college days. In my circle, she is one of the lucky few. Most girls I know couldn’t seem to find a man whom they could call “the one,” (me included), but this woman has. It somehow makes me believe that true love exists, at least for some people.

Witnessing how love happens, it makes everything worth it. And even when I accidentally gatecrashed another wedding, it was oddly satisfying to watch two love stories meet a happy ending that day. 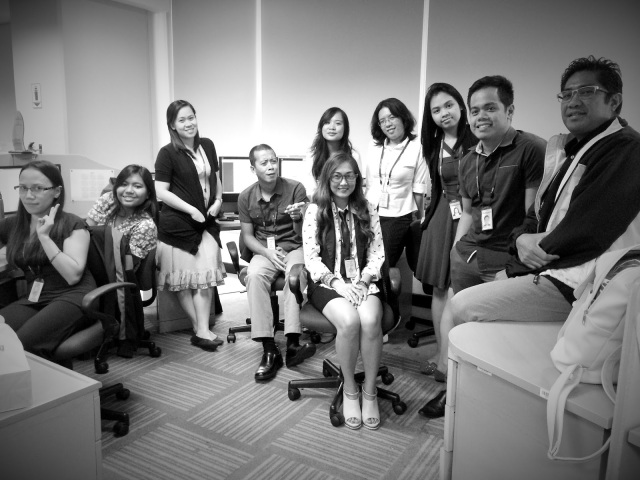