And the real solo traveling began. My accidental travel buddy in Vietnam has gone back to the Philippines while I continued my way to Cambodia. The morning of my departure, I tiptoed my way out of the room at Koniko Backpackers Hostel so as not to disturb my roommates. My bag was markedly heavy this time with all the stuff that I bought from Ho Chi Minh to take home with me; nothing too fancy, just a few pasalubong for my friends and family. There’s a man sleeping at the lobby and I was careful not to awaken him. But when I saw that the gate was closed, I was left with no choice.

It was around 6 in the morning and Ho Chi Minh was slowly waking up from its own slumber. I stopped to ask some people along the way looking for the bus terminal of Mekong Express. I booked my ticket online for VND 528,471 (PHP 1,113 – USD 23), I just needed to be in the terminal to have my printed ticket validated. There are several buses parked along Phạm Ngũ Lão street so I searched for the Mekong bus. When I found it, the man standing in front of it took one look at my printed receipt then pointed me across the street. I realized he was telling me to go to the office of Mekong Express that is sandwiched between other bus liners. [Read: Braving the Streets of Ho Chi Minh]

I went inside and waited for the staff to validate my ticket. There were other tourists waiting inside the office either for the same reason as I did or to buy their ticket. Some were backpackers, others were carrying huge luggage bag that could fit a person. It makes me wonder how long these people would be traveling.

I booked the seat behind the driver. Fortunately for me, the seat beside me remained unoccupied during our trip from Ho Chi Minh to Phnom Pehn. The extra space helped me sleep better.

I inspected the bus because I read some reviews online that described it as old and worn out. To some extent, the reviews were true; the bus does look outdated, but then again, I’d seen worse back in my country. All in all, my experience with Mekong Express was good. I liked that the backrest of the seat has a support for the lower back, which enabled me to bear the long travel comfortably. I also appreciated the bottled water and some pastries that they provide for snacks to the passengers.

The bus conductor is a dark-skinned man with chinky eyes. Unlike the bus conductor in the Philippines, he doesn’t issue tickets, his role is to make announcements and to assist the passengers on what they should do during border crossing. He delivered his announcements, first in Khmer language, then in English, neither of which I was able to understand due to his accent. I just stared at him helplessly as I failed to grasp the message he was trying to convey.

At 9:15AM, we reached the boarder that separates Vietnam from Cambodia. The bus conductor took our passports, directed us to alight from the bus and to enter the immigration building. This is the first part of the border crossing process. The Vietnam immigration checked our passports and collected fees when applicable. Being Southeast Asian, I was lucky that I didn’t have to pay for immigration fee. I just waited patiently for my passport to be stamped, that’s it.

We were in the immigration for at least 45 minutes. We went back to the bus, then 3 minutes later we were passing through another building that is the Cambodian immigration. The process only took 12 minutes this time. After getting our passport stamped with the Cambodian seal, we were back on the bus to continue our journey to Phnom Pehn. Taking photos inside the immigration is forbidden by the way.

It was 2:20PM when we reached the Mekong Bus Terminal in Phnom Pehn. It was the final stop for some passengers while I and those who are also going to Siem Reap had to be transferred to another bus.

The bus conductor on this one is a young Cambodian woman. When the woman started translating her announcements in English, I knew that I should just give up trying to understand them. Her accent is so heavy she sounded like she wasn’t speaking in English at all. And I am not being racist here before you start calling me that. If you don’t believe me, travel through Mekong Express.

This time, I had a seatmate but I still managed to sleep (that’s what you call talent). At 5:30 we had a quick break in our journey. While the others chose to take the time for some early dinner, I chose to have some ice cream.

I heard some passengers speaking in Tagalog, but I wasn’t in the mood to socialize so I just let them be. I saw them looking at me; maybe they sensed that I was also Filipino, I’m not sure.

Finally, after 13 hours of travel, we reached our destination. It was already dark when we arrived at the bus station. There are some tuktuk drivers waiting, offering their services so I approached one of them. I showed him the address of the hostel where I’d be staying. He nodded and charged me USD4 (PHP188). It was a relief for me to be paying in dollars because I found the too the many zeroes in the Vietnam notes profoundly confusing. Cambodia accepts both Riel and US Dollars.

This is my first time to ride a tuktuk and I found it very comfortable and spacious compared with the tricycles that we have back home. It only took 23 minutes to get from the bus terminal to my hostel. I was too early for my check-in so I had to pay an additional USD7.

And so I arrived safely in Cambodia and I felt lucky that nothing bad happened along the way, including not having an issue with the immigration. It was a long tiring day and I didn’t know what Cambodia has in store for me. I slept on my bed with a renewed hope that my time in Cambodia would be so much better than my time in Vietnam. 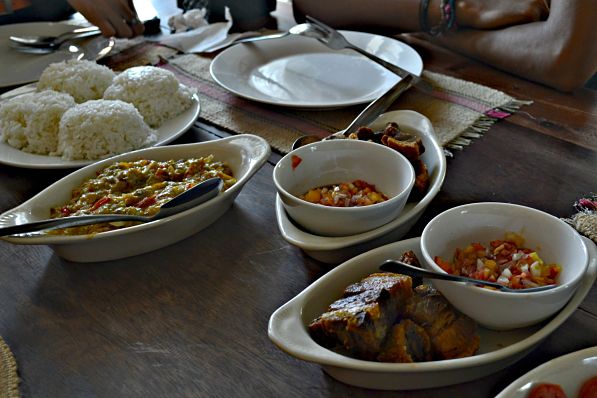